The beginning of something new

Coming fresh out of school as a 3D artist, my main goal was to get a job as soon as possible and get the experience needed to take on further and more requiring jobs in the future. In the movies/commercial business, where I started, jobs were very often based on temporary contracts that could last for a couple of weeks/months at the time. Jobs were also hard to come by if you lacked working experience and/or connections. To make it even worse, the global economy wasn’t looking good at all in 2010 which forced alot of companies to stop hiring all together. I ended up not getting what or where I wanted during the first couple of years, doing 2D prints and lots of free work to get attention from possible employers. Meanwhile a friend from school was hired to work on Battlefield 3, which made me consider going into the games industry. So I started getting into how to make 3D for games rather than movies, and a couple of months later he informed me that DICE was about to hire people for an upcoming project. I sent in my application along with a personal letter, and within a week I have had an interview and the recruiter had called me, telling me I was going to work on Battlefield 4 as a Technical Artist. Achievement Unlocked! 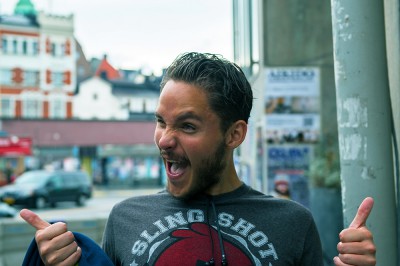 Literally my face when I was hired